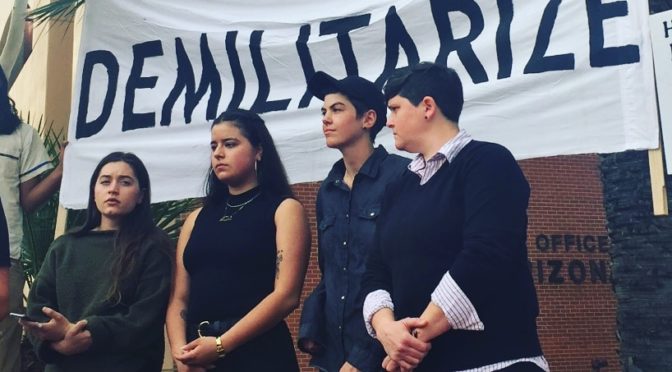 Firstly, we want to acknowledge that we are standing on occupied land of the Tohono O’odham people. Let us not forget the illegality of the United States of America on indigenous territory and the way the US has ravaged Central America, forcing diaspora. Furthermore, this government has considered slavery and genocide as legal for hundreds of years.

We may have been found guilty but the real crime is the government’s deliberate policy to use “death as a deterrent” at the US/Mexico border. The criminalization of those acting in solidarity is a classic example of the ramping up of an authoritarian regime.

The humanitarian work that has ultimately brought us here today will continue to address the border crisis until there are no more deaths.

We refuse to stand by and watch silently as the United States becomes more and more deeply authoritarian. This is something that affects and should concern us all.

The four of us want to thank everyone in our families and communities here and across the world for their unbelievably wonderful support and solidarity. We also want to thank our team of lawyers and those of you here today who are prioritizing telling this story.