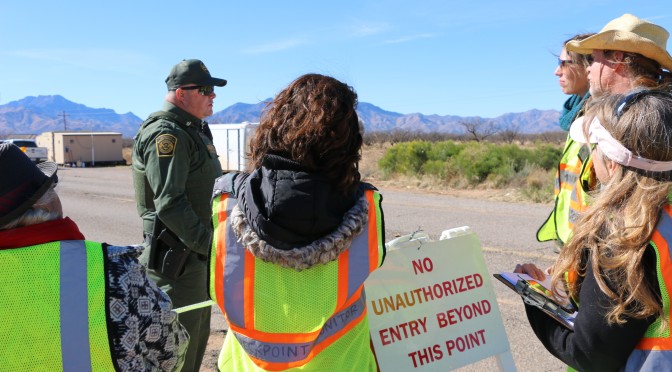 Residents of Arivaca, Arizona can’t leave their peaceful town near the border with Mexico without encountering military checkpoints. Agents of the Border Patrol stop all traffic and ask questions while a dog sniffs the vehicle for drugs. Drivers may be asked to show ID and even ordered out of their vehicle while agents search it.

People Helping People has been monitoring the Arivaca Road checkpoint since 2013. On February 3, monitors began peacefully observing a second checkpoint west of Arivaca. When they returned the next day, the checkpoint was roped off.

People Helping People, a local group allied with No More Deaths, has asked Border Patrol to remove these interior checkpoints. When their request fell on deaf ears, Arivaca residents showed up at a checkpoint on Arivaca Road, near Interstate 19 and the route to Tucson, in 2013 to observe any harassment and violation of people’s rights.

In February 2016, monitors set up chairs across from a second checkpoint west of Arivaca on Highway 286, north of the border town of Sasabe, and began taking notes. The agents were tolerant on February 3, when monitors peacefully observed the primary inspection area for six hours. But when monitors arrived the next day, the checkpoint was roped off with signs that read: “No pedestrians.”

“We’re about two hundred feet back and not able to hear,” said PHP volunteer Sophie Smith about the new “enforcement zone.”

Border Patrol also barricaded the checkpoint on Arivaca Road in reaction to citizen monitoring at that location, Smith said. She believes monitors provide oversight and prevent abuse of motorists while they are present. Arivaca monitors found that Latino drivers were 26 times more likely to pull out their ID than white motorists and 20 times more likely to be pulled into secondary inspection.

PHP volunteer Sophie Smith believes monitors provide oversight and prevent abuse of motorists while they are present. Arivaca monitors found that Latino drivers were 20 times more likely to be pulled into secondary inspection.

“We’ve been monitoring for more than two years now (at least weekly) and we’ve never observed anyone apprehended for crossing into the US without papers,” Smith said.

Instead, border crossers make a wide detour around the checkpoints, hiking farther into the Arizona desert where they risk running out of water and dying.

The American Civil Liberties Union (ACLU) filed a lawsuit against US Customs and Border Protection on behalf of two resident observers, according to PHP. The suit cites the installation of the enforcement zone as a constitutional-rights violation, which restricts free-speech and free-assembly activity at the checkpoint.

In October 2015, the ACLU released a report that identified more than 140 citizen complaints against Border Patrol at Arizona checkpoints between 2011 and 2014, said ACLU attorney James Lyall. Most allege violation of the individual’s Fourth Amendment right against unreasonable search and seizure. Virtually none of the complaints have been investigated, according to CBP records provided to the ACLU.

Featured photo: Liza Corr. Observers from People Helping People in Arivaca, Arizona monitor a Border Patrol checkpoint, located 26 miles north of the Mexico border on Highway 286, to prevent harassment and document any abuses against motorists. Agents were diplomatic to the group and allowed them to observe the primary inspection area, but they erected barricades when the monitors returned the next day.