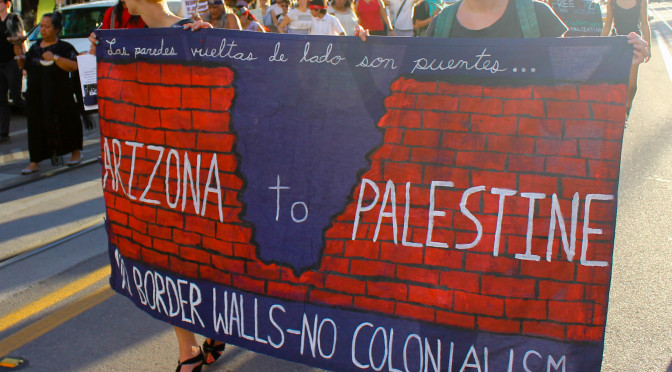 As a long-term ceasefire sets in over Gaza this week, 51 days of death and destruction leave a grisly toll: at least 2,100 Palestinians are dead, mainly civilians, including more than 500 children, and 11,000 have been injured. A staggering 89 whole families have been wiped out. Additionally, five Israeli civilians, including one child, and 64 soldiers have died since Israel’s massive military assault on the Gaza Strip began. One third of Gaza’s 1.8 million residents are left homeless; Israel destroyed at least 17,000 homes.

Here in southern Arizona, we have been witnessing Israel’s emergence as a key business client in the booming border-security industry. We understand our firm opposition to US-backed Israeli violence in Gaza through our group’s core mission to end death and suffering along the Mexico–US border. More than three weeks into the military operation, No More Deaths released a statement outlining our call for boycott, divestment, and sanctions (BDS) targeting Israel until it complies with international humanitarian and human-rights law.

On August 22, No More Deaths volunteers were among some 100 Tucson community members who joined in a Palestine-solidarity march that rallied on the University of Arizona campus in front of the National Center for Border Security and Immigration or BORDERS, a research consortium sponsored by the Department of Homeland Security. Acts of solidarity grow more germane after post-ceasefire periods of “calm” have set in—when Gaza disappears from the headlines. As Israel unabashedly continues its low-intensity-warfare-based military occupation and colonial settlement of Palestinian territories, we must work openly and in community to uphold fundamental human rights, from southern Arizona to Palestine/Israel.

Photo courtesy of Nadia Hassounah. The figures in the first paragraph are based on cross-listed accounts from Gaza’s Ministry of Health, the United Nations, and the Palestinian Centre for Human Rights.