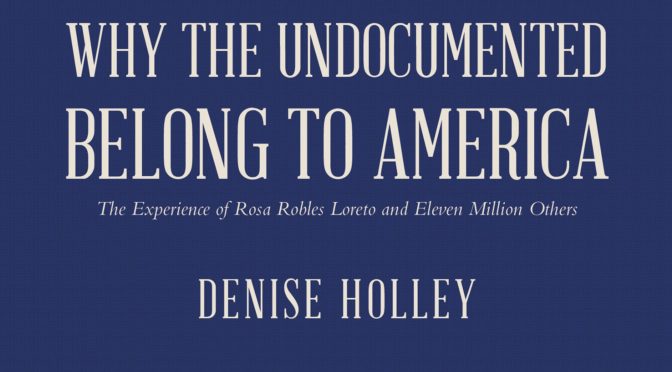 No More Deaths volunteer Denise Holley has published her first book, Why the Undocumented Belong to America. A longtime journalist, Holley began editing the NMD newsletter in the spring of 2012. Here is the first chapter of the book.

It was never supposed to go on this long.

Rosa Robles Loreto packed an overnight bag and moved into a small room at Southside Presbyterian Church in Tucson on August 7, 2014, seeking sanctuary from a deportation order. She thought she would be able to return to her home and housecleaning jobs in a matter of days or weeks. Daniel Neyoy Ruiz, the previous sanctuary seeker at the church, got a stay of his deportation order in less than a month. 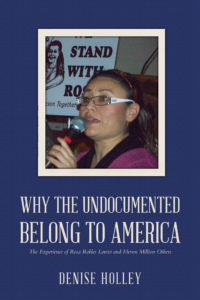 But in the fall of 2015, the undocumented Mexican mother, then forty-two, still lived in the little room at Southside with its bunk beds, refrigerator, microwave, and computer. Her life turned upside down. Instead of rising at 4:30 a.m. to start her busy day as a working mother, Rosa stayed up late into the night. When sleep wouldn’t come, she read her Bible, listened to Christian music, and watched inspirational movies online, often until 4:00 a.m.

“They were my refuge,” Rosa said, a way to take her mind off her boys, Gerardo Jr., eleven, and José Emiliano, eight, and everything she missed about them. She and her husband, Gerardo Grijalva, decided the boys should live at home to keep their lives as normal as possible. They showed up on weekends, often in uniforms and fresh from baseball games, and sat with her during the Sunday worship service.

One element at a time, Rosa’s old life slipped away — the housecleaning jobs, her boys’ baseball games, and her Catholic parish where she volunteered and where her sons were studying catechism and preparing for their first Holy Communion.

While she waited, Rosa drew spiritual strength from the Protestant church that took her in. Its unique style was unfamiliar at first but warm and welcoming. Every Sunday, she worshipped in the kiva (the sunken Hopi-style sanctuary), usually with her family. Sometimes she read a Bible verse in Spanish from the pulpit, a tradition in the multicultural church. With time on her hands, she sought ways to be useful. She chopped vegetables for the twice-weekly meal for the homeless and people in need. She listened to English-language tapes and conversed with the volunteers who accompanied her every evening and weekend. Once a month, she helped at an immigration clinic held at the church, encouraging other people trying to fend off deportation.

The high point of each day was the 7:00 p.m. prayer vigil. Sometimes visitors from local churches crowded into the fellowship hall, and other times just a few supporters came to pray with Rosa for her deliverance. Occasionally, a Catholic priest celebrated Mass with her, and Bishop Gerald Kicanas of the Catholic Diocese of Tucson visited several times.

The wait for a resolution to her deportation case was “excruciating for [Rosa],” said Southside member Cecilia Valenzuela Gee, who helped coordinate a network of volunteers to stay with Rosa. “The vigils are a tremendous source of support for her.”

Rosa lived in the calm eye of a hurricane over illegal immigration that swirled around Southside and the entire country. In the 1980s, Southside members sheltered undocumented Central Americans who risked death if they returned home. The church, under the leadership of the Reverend John Fife, became the cradle of the sanctuary movement. When a new sanctuary movement surfaced in the twenty-first century to protect immigrants from deportation, the Southside community decided — again — to offer protection.

“I think this [sanctuary] movement is grounded in faith and guided by the words of Jesus to keep families united,” said Valenzuela Gee, who was raised Catholic. “This is the right thing to do.”

Providing sanctuary has “deepened our sense of what hospitality is all about,” said the Reverend Alison Harrington, pastor at Southside.

It also brought more people and publicity to the church and thrust Rosa into the national spotlight. Reporters and television crews interviewed Rosa and publicized her case locally and across the nation. As her time in sanctuary wore on, she became a local celebrity and a national symbol of the fractured, inconsistent US immigration policy.

Rosa never sought publicity, but she realizes she is a symbol. “It embarrasses me,” she said about all the media attention, but “with my voice and my experience, I want to serve other families [who face deportation], because we are millions.”

Rosa told me she hoped Americans wouldn’t resent her and her family for wanting to settle in the United States sixteen years ago. “We immigrants don’t come to take away anyone’s rights,” she said. “We simply come in search of opportunities.” Someday, she would like to own a housecleaning business.

She spoke warmly of her circle of Southside supporters and especially Keep Tucson Together, a working group of the humanitarian aid organization No More Deaths. KTT took her immigration case to the courts and then to the streets. “I fell into blessed hands,” she said about the group whose attorney, Margo Cowan, pursued her case for several years and never gave up.

In September 2014, Rosa’s supporters persuaded first the Pima County Board of Supervisors and then the Tucson City Council to pass resolutions of support for Rosa as a valued member of the community. In January 2015, the Arizona Daily Star in Tucson called on the Department of Homeland Security (DHS) to close Rosa’s deportation case. Church members and supporters flooded DHS, President Obama’s office, and Immigration and Customs Enforcement (ICE) with hundreds of letters and e-mail messages.

Cowan repeatedly appealed to ICE for a reprieve. The response was silence.

“When we started in August [with Rosa], I never dreamed we’d still be here at Christmas,” Cowan told the Southside congregation on December 14, 2014.

Why the Undocumented Belong to America can be ordered at www.createspace.com/6758464.