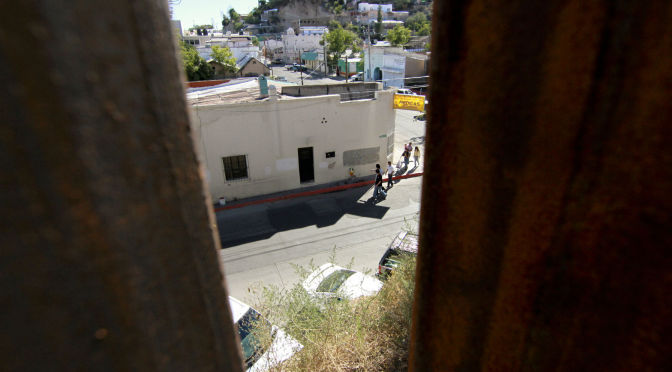 José Antonio Elena Rodríguez, sixteen years old, was walking down a street next to the border in his hometown of Nogales, Sonora, Mexico on the night of October 10, 2012. A cross-border incident was taking place. Border Patrol Agent Lonnie Swartz, arriving on the scene, targeted José Antonio, firing sixteen times — from a hundred feet away, through the twenty-five-foot steel border wall that looms over the street. Ten of Swartz’s bullets tore into José Antonio’s body, two in his head and eight in his back.

José Antonio was a son, a brother, an uncle, and a friend.

As a result of the almost six years that José Antonio’s family has fought for justice for him, many members of our community have had the opportunity to visit the place where he died. All have been struck by the way the very geometry of the scene cries murder.

In outrage at the April 23 verdict, a coalition of community members including No More Deaths volunteers took control of the streets for over seven hours.

In outrage at the verdict and in solidarity with the family of José Antonio, a coalition of community members, including volunteers from No More Deaths, took control of Tucson streets for over seven hours, demanding justice.

The acquittal of Lonnie Swartz is a glaring example of the racist culture of impunity that enables border agents to violate human rights and literally get away with murder. The family of José Antonio, in their pursuit of justice, has had everything stacked against them — including their Mexican citizenship. The nativism and white supremacy inherent in the US justice system is reflected in the April 23 verdict, as is the familiar belief in the infallibility of law enforcement that so often serves as a mechanism.

Under public pressure, prosecutors announced on May 11 that they would retry Swartz on the manslaughter charges he was not acquitted on. Whether he is ultimately convicted or not depends, in part, on people like us.

Justice for José Antonio!
Justice for all victims of Border Patrol violence!

Featured photo: On October 13, 2012, people walk past flowers placed where José Antonio died. (Photo taken through one of the four-inch gaps through which Swartz fired.)