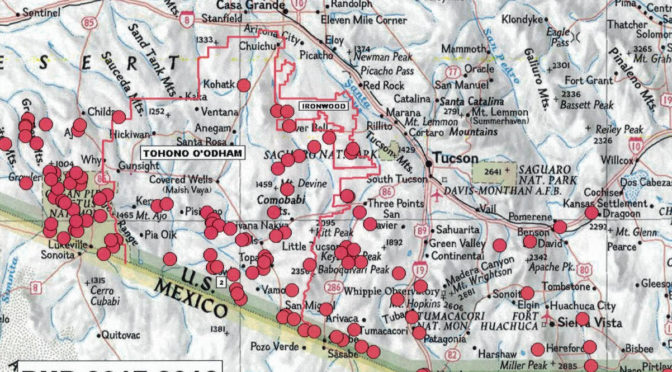 During the twelve-month period from October 2017 through September 2018, the Pima County Forensic Science Center—the morgue for most of southern Arizona—received the remains of 122 undocumented border crossers.

“Recovered human remains” are just a small percentage of the people who have died crossing the Mexico–US borderlands.

Of those sets of remains, 41 (over 30 percent) were from the west desert, where temperatures are highest and water sources scarcest. The US policy of “prevention by deterrence” has driven people, who in desperation migrate from their homelands, to attempt the journey through these perilous lands in ever-increasing numbers.

We know with certainty that the “recovered human remains” are just a small percentage of the people who have died crossing the Mexico–US borderlands. It is literally impossible to carry enough water to survive in desert terrain where temperatures consistently exceed 100 degrees during the summer months.

No More Deaths has made it a priority to respond to this tragedy by increasing efforts to provide lifesaving water, food, and medical attention along known migrant trails in the west desert.

We ask you to join us in demanding that the charges be dropped.

Despite the high number of migrants who disappear in this vast area, federal land managers and the Border Patrol have increasingly targeted No More Deaths’s aid workers for prosecution and have even defiantly destroyed food and water left by our volunteers. By doing so, the government only compounds its responsibility for the death and suffering that are occurring.

We stand firm in our belief that the act of giving food, water, or medical assistance should not be criminalized, and we will continue to do what we must to help save lives.

We ask that you join us in demanding that charges be dropped against the nine volunteers who in good conscience and with respect for human dignity and basic human rights took action to care for others, regardless of their status.

Featured photo: Recovered human remains over the last year. The thick cluster of dots at the far left marks the deadly west-desert corridor.