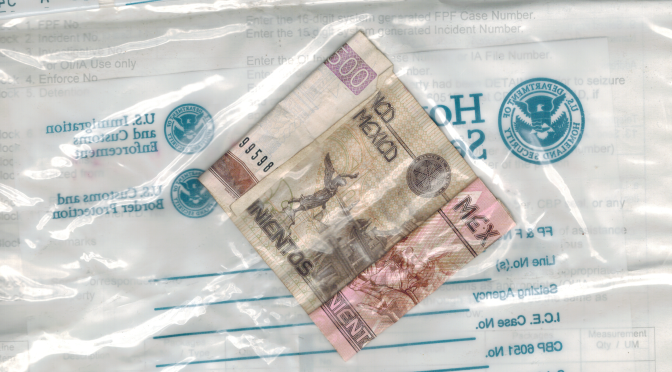 Hundreds of thousands of immigrants each year are dumped at the Mexico border and permanently expelled without their most basic belongings: their money, identification documents, cell phones, important phone numbers, photos and keepsakes. From the border they must find a way to travel to their place of origin in Mexico—with nothing. You can act right now to help stop this travesty.

No More Deaths’s new report Shakedown: How Deportation Robs Immigrants of Their Money and Belongings (released today!) exposes the sometimes neglectful, sometimes predatory practices of the Border Patrol, Immigration and Customs Enforcement, and private prison companies that deprive immigrants of their personal property. President Obama’s executive action will do nothing to change these practices, and could intensify them. 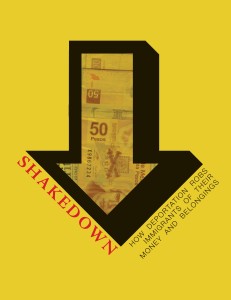 The Border Patrol nowadays sends migrants detained at the border to criminal court, where they can be sentenced to prison for months for “illegal entry.” Then the Border Patrol destroys their belongings, including all their non-US currency, before they are even released. This is not seized property that is being confiscated: these are detained personal effects that are the lawful property of their owners.

Many immigrants of Mexican origin find themselves penniless when they are deported to Mexico, but not because they lack funds. Money they were carrying when detained, money they earned from work while detained, and money sent to them by family members is often not returned to them in cash. Instead, they are sent packing with a domestic US check that cannot be cashed in Mexico or a prepaid debit card that cannot even be activated there. This is theft, pure and simple.

Please join us in saying that the shakedown must stop.

People deported to Mexico face serious threats to their safety. So taking away their money and belongings doesn’t just violate their property rights, it also places them at heightened risk. They are unable to buy a bus ticket to leave the volatile border region, unable (without ID) to receive travel money that their family wires to them, or even unable to call their family for help.

We must #StopTheShakedown that is placing so many people at risk. Please join us in taking the following actions:

1.    Send a quick fax and email to the Secretary of Homeland Security, Jeh Johnson. —December 18 is International Migrants Day, a day to honor the rights of migrant workers, including their property rights. Can we send 2,000 messages by December 18?

2.    Call Johnson’s office at 202-282-8495 and leave a message: “I am calling to ask Secretary Johnson to make sure that no more people get deported without their money or belongings. This is a violation of people’s rights and puts them in an unnecessarily dangerous situation.” This phone number is an answering machine, so let’s fill it up.

3.    Start a conversation in your community or church about this little-known reason to oppose the deportations that continue to ravage our communities. #Not1More!