Rosa Robles Loreto, A#200-904-099, has lived in Tucson since 1999. She has 16 US-citizen and legal-permanent-resident family members who reside in Tucson and consider Tucson their home. Rosa is a parishioner at Santa Monica Parish in Tucson and volunteers at her church. She is a trained public accountant in Mexico and dreams one day of being able to be licensed to work as a Certified Public Accountant in the United States. Rosa is active in supporting her sons’ academic and extracurricular pursuits. She volunteers at their school and her husband coaches one their baseball teams. Rosa regularly engages in fundraising and organizes 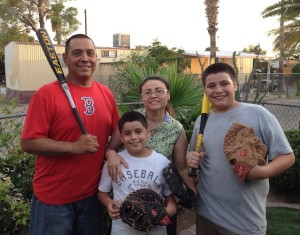 carpools to support her sons’ baseball teams and their fellow teammates.

Rosa was placed in removal proceedings following a minor traffic violation in September 2010. While this incident did not result in a traffic ticket, a Pima County Sheriff’s Deputy called Border Patrol and she was taken into ICE detention for 53 days. In July 2014, after having fought her immigration case through the courts, she was ordered to be deported. Rosa is a great example of an individual who the Obama administration has said should not be a priority for deportation, yet her case was never thoroughly reviewed for administrative closure. Now Rosa lives with an order of deportation hanging over her head and is not safe to move freely in her home community of Tucson—within Border Patrol jurisdiction. The only way to keep Rosa’s family together is for Secretary Johnson and Director Saldaña to hear directly from you that her deportation must be stopped and must be stopped now.

Stay updated on how the family is doing and how you can support: connect with us on Facebook.