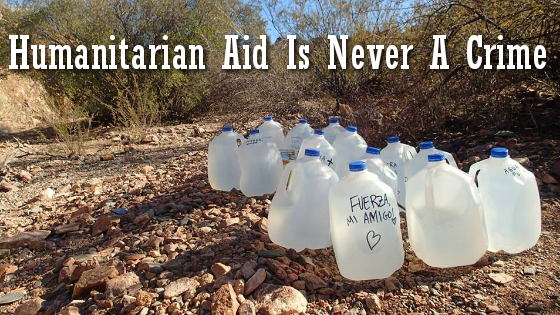 On Tuesday, January 15th at 8:30 AM, No More Deaths will hold a pre-trial press conference outside the Deconcini Federal Courthouse, 400 W Congress.  We ask supporters to join us then and for the rest of week in the courtroom as the trial unfolds.  Please tell us you are coming so we can be in touch if needs or updates arise.

January 15th, 2019, TUCSON, AZ – Four No More Deaths volunteers facing federal misdemeanor charges begin trial today for their humanitarian aid work along the southwest border.  The aid workers are being prosecuted for their efforts to place life-saving food and water on the Cabeza Prieta National Wildlife Refuge, a vast and remote area south of Ajo, Arizona where 91 border crossers are known to have died since 2014 and countless more have gone missing.

“Members of our organization are being criminally prosecuted for placing water in areas where hundreds of people have died of thirst.” says Paige Corich-Kleim, a humanitarian aid volunteer with No More Deaths. “Anybody who has visited the refuge understands the harshness of the terrain and the need for a humanitarian response.”

The summer of 2017 was one of the deadliest on record in Arizona, resulting in a total of 32 known migrant deaths on the Refuge.  No More Deaths volunteers maintained a consistent presence in the area, putting out humanitarian aid supplies and responding to search and rescue calls for missing migrants.  That winter, nine volunteers, in places as disparate as New Orleans, Minneapolis and Seattle, received knocks on their door from the U.S. Fish and Wildlife service.  Charges include operating a motor vehicle in a wilderness area, abandonment of property, and entering a wildlife refuge without a permit. One of the defendants is Ajo resident Dr. Scott Warren, who is also charged with felony harboring and conspiracy related to humanitarian aid work.  Dr. Warren’s felony trial is scheduled for May of this year.

The trial begins as the country goes into the fourth week of government shutdown, the longest in history.  “The president is holding the country hostage over his demand for a border wall and claiming the humanitarian aid crisis as justification for his actions,” says Max Granger, another longtime volunteer with the group.  “We believe a humanitarian crisis warrants a humanitarian response.  A border wall will do nothing to alleviate the crisis of death and disappearance along the US-Mexico border.  The protection of the right to give, and to receive, humanitarian aid is essential as long as the government maintains border policies that funnel migration into the most remote parts of the desert.”

Trials are expected to last through the week, with a verdict being issued sometime after trial ends.  Dr. Warren’s misdemeanor trial is scheduled for February and the final round of Cabeza defendants will go to trial in March.