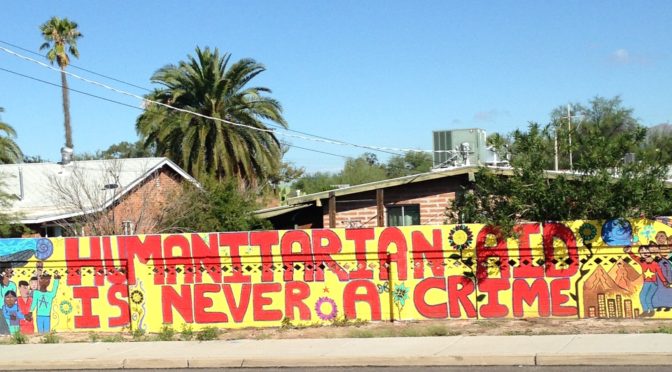 For nine volunteers facing misdemeanor charges for humanitarian-aid work on the Cabeza Prieta National Wildlife Refuge, trials will wait until next year.

The volunteers recently filed a series of pretrial motions to dismiss the charges. One motion argues that criminalizing humanitarian aid violates international law. Another argues that the government is selectively prosecuting No More Deaths volunteers. Another argues that the volunteers’ activities on the refuge were a matter of urgent necessity to preserve human life. There are also motions filed to dismiss all charges based on the Religious Freedom Restoration Act, arguing that the government’s prosecution of humanitarian volunteers places a substantial burden on their ability to exercise their deeply held spiritual belief in the sanctity of all human life.

The Cabeza Prieta National Wildlife Refuge is one of the deadliest migration corridors along the US–Mexico border—the government’s own description of this vast, remote region states that it “is big and wild and can be incredibly hostile to those that need water to survive.” Maintaining a strong humanitarian presence in this area is vital. All of the volunteers’ charges stem from actions they took with the goal of preventing further unnecessary loss of life in this region where thirty-two sets of human remains were recovered in 2017 and where many more people have disappeared without a trace. The intention to save lives has never been disputed by the prosecution, and our defense argues that the decision to pursue criminal charges “violates the universal sense of justice.”

The above-mentioned motions will be argued at a November 16 evidentiary hearing in Tucson. Trials are currently set for early 2019. Stay tuned for final dates and a callout to come support our volunteers in the courtroom.

For more background on these cases, see our website and this recent article in The Intercept.

Featured photo: A new mural on a street-facing wall on East Broadway in Tucson offers a daily reminder to thousands of motorists that humanitarian aid is a duty and therefore a right. The painting of the mural, on September 8, was a collaborative effort between No More Deaths volunteers, artists, and the property owner.