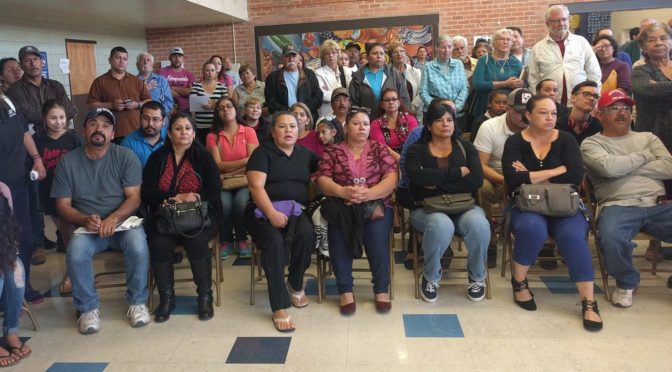 No More Deaths was born thirteen years ago to aid vulnerable people migrating across the deadly Arizona desert. As this core mission continues and expands, NMD has reached out its arms to help people after deportation and document the abuses they have experienced. In Tucson, one NMD working group helps immigrants living in the US who risk deportation and/or detention every time they leave their homes.

Under a dark shadow

Keep Tucson Together, founded in 2011 to stop deportations, convened its weekly legal clinic last October 5 at Pueblo High School under a dark shadow: “This is the day DACA died,” attorney Margo Cowan said while getting ready in the cafeteria. It was the last day for young people to renew their two-year work permits after President Trump ended the Deferred Action for Childhood Arrivals program.

“They (DACA recipients, often called Dreamers) and their parents form an integral part of this country,” volunteer Mical Alvarado Diaz told dozens of people present. “To end DACA would be a tragedy.”

“There’s a lot of fear,” said volunteer Zulima Martínez. She serves on a committee that prepares paperwork that may convince a judge to cancel a removal order and close a resident’s deportation case.

Their parents brought Mical and her brother to the US without authorization as children. Both currently hold work permits under DACA. To obtain that status for some 800,000 young people, families divulged their names, addresses, and undocumented presence to US Citizenship and Immigration Services. Now parents worry that ICE could deport them.

“There’s a lot of fear,” said volunteer Zulima Martínez, who was formerly undocumented but is now a legal permanent resident. She serves on a KTT committee that prepares paperwork that may convince a judge to cancel a removal order and close a resident’s deportation case.

But the cafeteria bustled with hope. Legal volunteers notarized documents that say the bearer demands a court hearing if apprehended for an immigration violation. Others aided families trying to post bond to free a member from detention. Red-shirted volunteers helped legal residents take steps to become US citizens, able to vote and to sponsor their undocumented relatives.

Campaign for citizenship for Dreamers

Speaking in Spanish, Cowan held up cards that ask Arizona’s representatives in Congress to vote for a permanent DACA program that includes a path to citizenship. She urged Dreamers and their parents to sign the cards.

“This is a battle we will win,” Cowan declared.

“We’ve all passed background checks,” Alejandro said. “All we want to do is work and study and reach the American Dream to have a better life.”

He attends Pima Community College with an eye on a medical career and plays trumpet in the University of Arizona band. Now with DACA on shaky ground, “you keep living like you did, but you have to be more careful,” he said.

Story and photo of Zulima Martínez by Denise Holley.

Featured photo: A pensive Tucson community awaits a speaker at Pueblo High School during the launch of the People’s Power Campaign in February.

To learn more about Keep Tucson Together, visit our page at nomoredeaths.org or on Facebook.