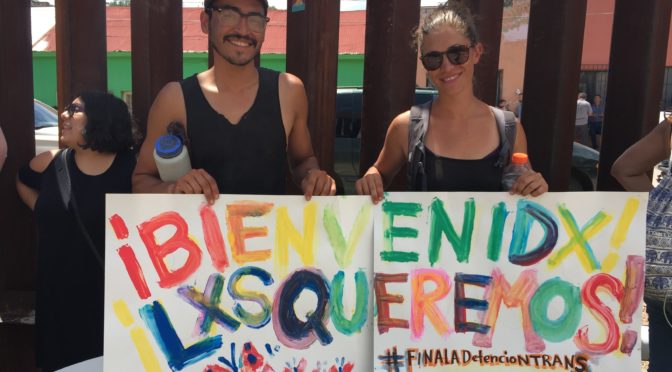 On August 10, a caravan of seventeen LGBTQI migrants presented themselves at the port of Nogales to claim their right of asylum in the United States.  Five remain in detention and need your support.

Five members of the Rainbow 17 remain in detention in New Mexico and are in dire need of contributions to their commissary accounts.

Fleeing persecution and violence in El Salvador, Mexico, Honduras, Guatemala, and Nicaragua, the “Rainbow 17” met in migrant shelters across Mexico and connected with Diversidad sin Fronteras, an LGBTQI activist collective, which helped organize the caravan. Caravan members are survivors of torture, extortion, trafficking, and attempted assassination, and they are determined to fight for their dignity and right to asylum in the US.

Five members of the Rainbow 17 remain in immigration detention in New Mexico, despite strong cases for humanitarian parole. They are in dire need of contributions to their commissary accounts, to keep up morale and continue with their asylum processes from inside detention.

To send funds to their commissaries, visit Access Corrections. The caravan members are being held at MTC Otero County Processing Center in New Mexico, and can be located with their ID numbers: