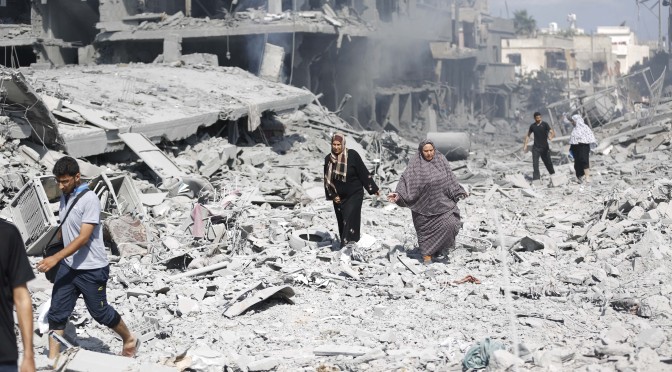 No More Deaths is an organization that believes that when governments fail to uphold fundamental human rights, it is the responsibility of people of conscience to work openly and in community to do so, through non-violent, direct intervention.  Despite internal debates we’ve long held that commentary on the Israeli occupation of Palestinian lands was best left to other organizations.  But given the urgency of the present moment we’ve reached a collective decision that we can—and should—no longer remain silent.

For several weeks, the international community has borne witness to a massive Israeli military assault on the Gaza Strip. We know of the killing of children, the bombing of hospitals, clinics, UN-protected shelters, and government ministries, and the destruction of thousands of homes and basic infrastructure, all leveled at a captive Palestinian population. With the initiation of a ground invasion and the death toll rising to over fourteen hundred,* it is past time for international human rights and social justice communities to take action.

As a humanitarian aid organization opposed to militarization here on the US–Mexico border, No More Deaths condemns military and security tactics abroad whose primary targets and victims are civilians. Our struggle against death and suffering here in the Arizona borderlands is deeply implicated in the struggle against US-funded war and occupation in Palestine. From Tucson-based Raytheon Missile Systems’ Israeli military partnership to the Department of Homeland Security’s recent border security contract with an Israeli arms manufacturing giant’s subsidiary (Elbit Systems of America) to set up surveillance towers in Southern Arizona, we continue to witness the same war-profiting industry that makes the assault on Gaza possible also contributing to the militarization of our communities in the US–Mexico borderlands.

We are therefore announcing No More Deaths’ official endorsement of the 2005 Palestinian-led call for boycott, divestment, and sanctions of Israel. We call on our membership and allies in the region to join the international community in directly pressuring institutions and businesses to sever economic ties with companies implicated in Israeli human rights violations until Israel ends the siege of Gaza and comes into full compliance with international and domestic law.

By happenstance, “no more deaths” has become one of the rallying cries of the Israeli-Palestinian peace movement opposed to the assault on Gaza. As governments on the US–Mexico border and in Israel/Palestine continue to use military violence to assert control rather than address the structural inequalities that produce these humanitarian crises, we affirm our commitment to work for the peace and justice that lie beyond walls, prisons, war, and occupation.

*More than 80 percent of Palestinians killed are civilians according to current estimates from the United Nations.