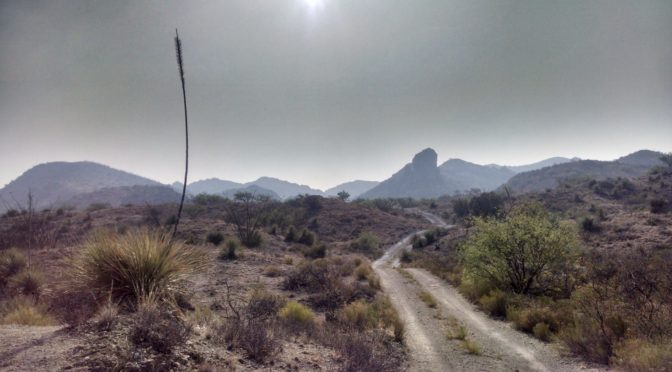 The impacts of a changing climate seem increasingly difficult to ignore. In southern Arizona, we experienced record high temperatures this summer. The heat combines with entrenched border militarization and reckless enforcement tactics to create deadly conditions for migrants and refugees.

Climate change catches people coming and going. At border aid stations and in the desert, we meet people who have been displaced from their homes by landslides, earthquakes, and crop failures. When they seek to rebuild their lives and support their families in the United States, they face an even hotter and drier desert crossing.

We talked with Todd Miller, a journalist and writer on border issues, about the links between climate change and migration—the subject of his forthcoming book Storming the Wall—and how they relate to the work of No More Deaths/No Más Muertes.

What’s the connection between climate change and migration, as far as what we’re seeing on the US–Mexico border?

According to most reports, the number of people to be displaced by climate change will be staggering and without precedent. The impacts of severe weather such as hurricanes, floods, sea-level rise, and drought are already hitting Central American countries, the Caribbean, and Mexico very hard. Where there are already unjust economic and political systems in place, climate catastrophes compound precarious situations.

“As we enter an era of extreme and potentially catastrophic weather, unprecedented in human history, there will be more militarized and violent international divides that refugees and displaced persons will have to face.”

In 2015, there was an unprecedented drought that dried up harvests throughout Central America. More than one million people, mostly small farmers, were affected. I met three of these farmers on the Mexico–Guatemala border as they waited to get on La Bestia, the infamous train, to go to the United States. As a Mexican military truck rumbled by with two masked soldiers holding assault rifles, perhaps on a border-policing mission fresh from US training, the farmers told me that they were heading north from their homes in Honduras because there was no rain, no harvest, and no food.

As more “climate refugees” arrive at the border, what will they encounter?

In 2003, the Pentagon envisioned a world in which the United States builds a “defensive fortress” to “hold back unwanted starving immigrants from the Caribbean, Mexico, and South America.” Since 2010, climate change has been identified as a top national-security threat. The Department of Homeland Security has created a climate-adaptation roadmap and plan, and made climate change one of the central issues of its 2014 Quadrennial Report. However, there is no discussion of a climate-refugee status, nor expanding US asylum to those displaced by climatic catastrophes.

Instead, at the US–Mexico border, people will face an ever more fortified enforcement zone of patrolling armed agents and sophisticated surveillance systems, such as towers, drones, and surveillance blimps, all under the same Prevention Through Deterrence strategy that has been forcing people into the desert, and killing them, for more than 20 years.

What can we expect to see in the southern-Arizona borderlands, if climate change and extreme weather events continue on their current path?

Even if countries keep to the emission-reduction pledges made at the climate summit in Paris, global temperature increases are projected to be well over the two-degree goal and on track to be beyond the point of no return. Some scientists are predicting unimaginably severe storms capable of heaving boulders, and a sea-level rise that will drown the city of Miami.

“Solidarity is not an alternative, it is not an option, it is our only chance. It is our only hope of ever moving forward and confronting this climate crisis.”—Yeb Sano, climate activist

For the US Southwest, climate experts at NASA predict megadroughts four times stronger than the 1930s Dust Bowl, which displaced hundreds of thousands of people in the United States. In the crosshairs of a dwindling water supply, wildfires, and dust storms, it is possible that Phoenix and Tucson will become largely uninhabitable, and there will be massive migrations of people within the United States. It is also possible that an internal expansion of a homeland-security surveillance regime, with armed guards who can stop, interrogate, and detain people, will be “protecting the homeland” against internally displaced refugees within the United States.

What are your ideas for what allies of migrants, refugees, and undocumented communities should be doing now to prepare for these impacts?

There are more than 70 securitized borders throughout the globe, where people are targeted, often racially, by armed guards and high-tech surveillance. As we enter an era of extreme and potentially catastrophic weather, unprecedented in human history, there will be more militarized and violent international divides that refugees and displaced persons will have to face. These border zones will be the terrain of battles between the rich and the poor.

This makes No More Deaths’s crossborder solidarity and organizing all the more essential. “Solidarity is not an alternative, it is not an option, it is our only chance,” Filipino climate activist Yeb Sano told me during the research for my upcoming book. “It is our only hope of ever moving forward and confronting this climate crisis.”