This article by Denise Holley appears in our fall newsletter.

Men, women and children apprehended by Border Patrol in the Tucson, Arizona sector are locked up under inhumane conditions that violate the US Constitution and the Patrol’s own policies, according to a lawsuit filed June 8 in US District Court in Tucson.

Legal groups filed the class-action suit, called Doe v. Johnson (Homeland Security Secretary Jeh Johnson) on behalf of three plaintiffs who said they were held in cold, dirty and crowded cells at the Tucson Border Patrol Station. The plaintiffs described having nowhere to sleep, no soap or showers, and inadequate food, water and medical attention.

The lawsuit “builds on the excellent and important work No More Deaths has been doing.”

The lawsuit charges Border Patrol with unconstitutional conditions of confinement and violating its own internal policies, said James Duff Lyall, an attorney with the American Civil Liberties Union of Arizona.

Border Patrol denies sleep, warmth, nutrition, hygiene supplies and medical screening to detainees, many of whom arrive exhausted and medically compromised after days in the desert, the suit alleges. Then detainees are held for days at a time in Border Patrol’s “temporary” holding cells. Agents routinely take away sweatshirts and jackets and push people into cells so cold detainees call them hieleras (iceboxes).

The lawsuit “builds on the excellent and important work No More Deaths has been doing,” Lyall said. He referred to the reports Crossing the Line (2008) and A Culture of Cruelty (2011), in which NMD volunteers documented thousands of incidents in which migrants were abused in Border Patrol custody. Both of these reports are cited in the lawsuit.

The suit would cover all people who are or will be detained overnight by Border Patrol in its Tucson Sector facilities, and seeks a court order requiring the Border Patrol to reform its policies and practices.

In addition to the plaintiffs, attorneys collected declarations from more than 75 former detainees, all of whom described experiences consistent with the plaintiffs’ allegations. They relied on numerous government and nongovernmental-organization reports describing the same inhumane conditions.

The plaintiffs are represented by the National Immigration Law Center, the American Immigration Council, the ACLU of Arizona, the Lawyers’ Committee for Civil Rights of the San Francisco Bay Area, and Morrison & Foerster LLP. 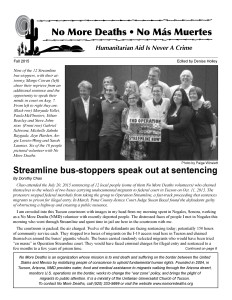