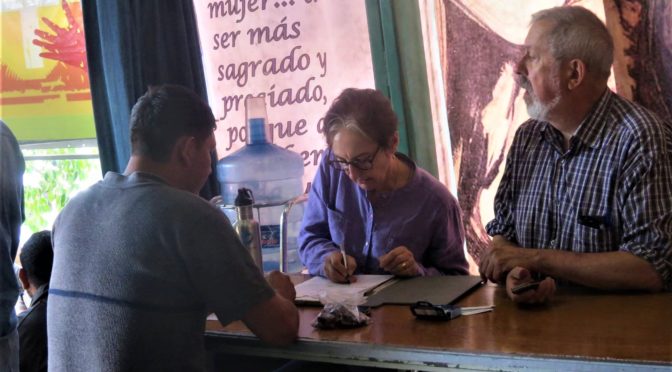 On a busy morning in Nogales, across the border at the Kino Border Initiative’s comedor (dining hall), I am helping serve breakfast to about seventy-five people who have just been deported. Most were recently apprehended while crossing the border. They are still dressed in the dark, rugged clothing they wore to blend into the desert surroundings. These are the people you could call migrants or refugees, who have left their home carrying their family’s hopes and dreams on their back or fleeing the unspeakable violent death that threatens them back there.

Others, though, are dressed in a way that would blend in on any US street. Many seem like deer caught in the headlights. These are the deported immigrants. They were going about their business as recently as two or three days ago, taking their children to school, going for groceries, going to work. Now they are here, abruptly cut off from their very life, their everyday ordinary—the ordinary that keeps us all sane.

The phone volunteers help him call his family—“I am okay; I am in Nogales; I love you . . . Yes, tonight . . .” When he finishes, the volunteers chat with him. He is actually a US citizen! Born to farm workers in California. Raised in the US. But no papers.

As an RN, and one of the coordinators of the services that No More Deaths offers at KBI’s comedor, I am making my way to the corner where the first-aid supplies are kept so I can set up for the morning work. As I squeeze past a man of fifty-odd years gathering his things, he turns and looks at me. “Thank you,” he says, so I stop and speak with him. He tells me he is planning to “cross” back to the US tonight. He was picked up in an ICE raid in Minnesota where he has lived for forty-seven years.

Knowing a little of what he will face in the desert, and because of his age, I ask him to wait to get some supplies from us that may make him safer: a water filter for his bottle, some Band-Aids and Neosporin, moleskin for blisters.

While he waits, the phone volunteers help him make a phone call or two to his family—“I am okay; I am in Nogales; I love you . . . Yes, tonight . . .” When he finishes, the volunteers chat with him. He is actually a US citizen! He was born to farm workers in California and adopted by Puerto Ricans. Raised in the US. But no papers. Who knows if there is a birth certificate, or where it might be; records of births in the fields over fifty years ago must be sketchy, and why would he have them? Maybe the adoption was unofficial. It was a different time.

A growing percentage of the people we are seeing here in Nogales are deported US residents—undocumented immigrants and, occasionally, even undocumented citizens.

One thing I know for sure: if this man had blond hair and blue eyes, he would never have been questioned. I feel the familiar flash of intense anger. A growing percentage of the people we are seeing here in Nogales are deported US residents—undocumented immigrants and, occasionally, like this man, even undocumented citizens. They have all been ripped from the fabric of my country, a very personal manifestation of the sickness of racism and xenophobia that is spreading.

I am so thankful for No More Deaths—really in a selfish way. Without NMD I would not have a constructive outlet for the helplessness and anger I feel. I work with such an amazing group of people. Every one of us is trying, in different ways, to resist the destruction of undocumented people’s lives, both their physical lives and their social lives.

And I am so thankful to those of you at a distance who support us financially; without you we could not do the things we do. You are a very concrete part of the help and hope that we extend to people here on the border every day.