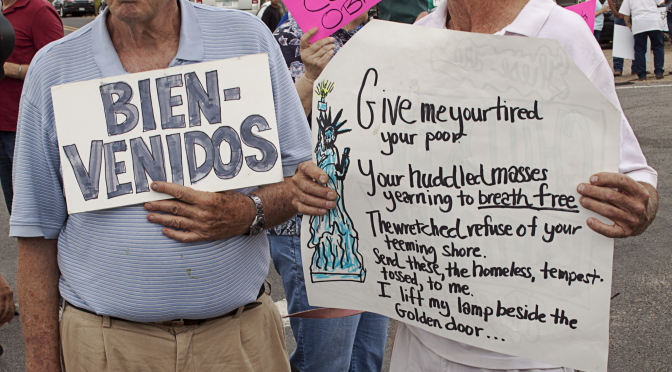 No More Deaths is one of eighteen signatories of this statement.

Recently, the US Senate failed to pass a border security appropriations bill, while the House of Representatives adjourned for August without responding in a viable way to the Obama administration’s request for emergency funding to address the issue of child refugees fleeing violence and poverty in Central America.

As border communities in Arizona who’ve witnessed the most damaging effects of twenty years of militarization and security-first approaches to immigration policy, it was both alarming and unconscionable that the Obama administration and congressional actors from both parties would use a refugee crisis involving vulnerable children to advocate for greater enforcement along the border; militarization of the countries from which these children are fleeing; and expedited deportation by gutting safeguards that ensure due process. Such actions were prone to exacerbate an already tragic situation, driving more children to risk their lives; emboldening Homeland Security agencies and private prison companies that have an established record of abuse; and diminishing the due process and humanitarian protections to which these children are entitled under US and international law.

We, as a country, must be better than this. As representatives of Arizona’s border communities who’ve witnessed this refugee crisis firsthand, we wish to affirm our commitment to human rights, and demand that any future appropriations or policy reforms prioritize the well-being and due process afforded to those vulnerable individuals who come to our country seeking protection. Such actions should increase accountability and transparency from the law-enforcement agencies tasked with enforcing immigration laws, particularly US Customs and Border Protection. And they must address the widespread and structural violence affecting the poor in Central America by addressing the economic conditions that fuel this violence, while holding governments accountable for human-rights abuses. Congress and the administration can begin by:

Children and families should not be used as an excuse to further militarize our communities on the southern border. We ask our allies and supporters across the United States to join us in insisting that the above policies and principles serve as the basis for the United States’s response to the current refugee crisis, and that these be incorporated into any future appropriations or reforms to border and immigration policy.