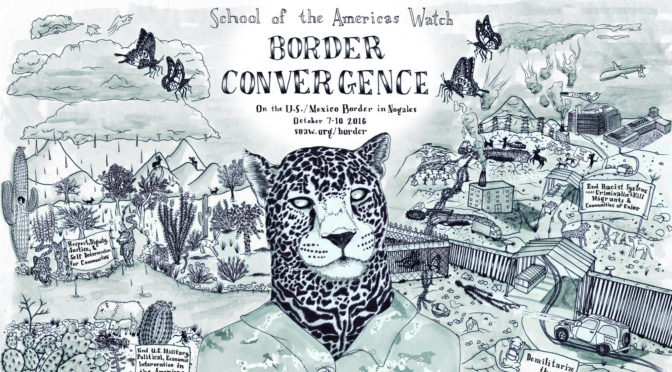 The No More Deaths community will join thousands of activists from all over the United States and Mexico October 7–10 when the School of the Americas Watch (SOA Watch) moves its annual vigil to the line between Nogales, Arizona and Nogales, Sonora.

For 26 years, SOA Watch has held a vigil at the gates of Fort Benning, Georgia, where police and soldiers from Latin America are trained in repressive tactics. This year, SOA Watch and partner groups will push back against militarization of the border and oppose criminalization of migrants and refugees. We will stand on the side of mutual aid and solidarity, and build power for a culture shift.

The demands of the Border Convergence are:

Latin Americans continue to flee from US-trained security forces only to be confronted with a militarized border, racist laws, and the xenophobic rhetoric in this election cycle. We can no longer separate the issues.

The Border Convergence will include workshops and events on both sides of the US–Mexico border, as well as art, music, and resistance. We invite you to join us. To learn more about why SOA Watch is moving the Convergence to the border, and to get information about travel, lodging and the schedule, visit SOAW.org/border.