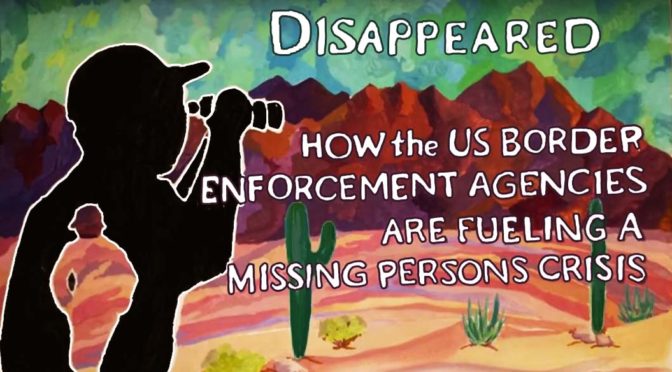 There is a crisis of death and disappearance happening at the US–Mexico border. Today, Tucson-based groups No More Deaths and La Coalición de Derechos Humanos release part 1 of a three-part report series aimed at bringing this crisis to light.

The series, Disappeared: How Border-Enforcement Agencies Are Fueling a Missing-Persons Crisis, focuses on three different Border Patrol practices that increase the likelihood of someone dying or disappearing while crossing the border. Part 1, Deadly Apprehension Methods, documents how Border Patrol agents chase groups and individuals causing them to scatter in remote terrain, where these border crossers are more likely to become lost, injured, or to disappear.

We ask you to take action now to end the crisis of death and disappearance.

With Trump’s promise to build a border wall and to deport two to three million immigrants who have built lives in the US, we will inevitably witness more deaths and disappearances in the borderlands.

Today, we ask you to call and fax two key congressional Democrats demanding that they do everything in their power to delay and halt Trump’s border wall. More specifically, we are asking these legislators to:

Send your faxes with one click, and use the numbers below to leave a message for each of these legislators.

Hi, my name is _____________, and I’m calling to urge Senator __________ to delay the building of a border wall under Trump’s administration. Please stand up for border communities and the rights of migrants by commissioning a GAO report on the cost of Trump’s wall, and by making a commitment that you will filibuster any bill that includes Trump’s wall or other border infrastructure that will push migration into deadly corridors.

Home > Abuse documentation > End the crisis of death and disappearance at the border!