The West Desert surrounding Ajo, Arizona is one of the most frequently traveled and deadly migrant corridors in the Sonoran Desert.  Increasing border militarization and surveillance have channeled migration routes into this vast, arid area, where in order to reach safety people must hike upwards of 80 miles through land with few natural water sources. Temperatures in this area often climb upwards of 115 degrees in the summer months. It is physically impossible to carry the amount of water one would need to survive the journey on foot without resupply.

Over the past several years, there has been a consistent pattern of recovered human remains in the West Desert.  Every year dozens of people die on the public lands that make up this West Desert, including Organ Pipe Cactus National Monument (Organ Pipe), Cabeza Prieta National Wildlife Refuge (Cabeza Prieta), the Barry M. Goldwater Bombing Range (Goldwater Range).  In 2017, a total of 57 sets of human remains were recovered in the area, accounting for nearly half the remains found in Arizona last year.

In No More Deaths we believe that the people arriving at the United States border should be greeted with #WaterNotWalls.  Instead, land managers have harassed, ticketed, worked to prosecute, and denied access to humanitarian aid workers in the West Desert.  By doing so land managers contribute to the crisis of death and disappearance that has turned United States public lands along the border into graveyards.

Four agencies manage the public lands in the West Desert: the National Park Service at Organ Pipe, The U.S. Fish and Wildlife Service at Cabeza Prieta, the Bureau of Land Management and the U.S. Air Force at the Barry M. Goldwater Bombing Range. 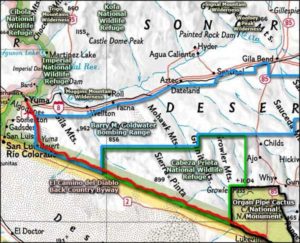 No More Deaths expanded our work into these areas in 2014, joining humanitarian efforts of the Ajo community and other humanitarian aid organizations already responding to crisis in the West Desert.  Since then, we have been involved in talks with these agencies about the needed response to the crisis of death and disappearance caused by current U.S. Government policies and practices.  As of the time of writing, however, volunteers are facing harassment and surveillance on Organ Pipe, prosecution for their activities on Cabeza Prieta and have had their access revoked on the Bombing Range.

On July 1st, 2017, land managers changed the hold-harmless agreement that all people must sign to access Cabeza Prieta and the Goldwater Range to include Clause 13, which reads:

I agree to remove from the [refuge] all personal property or possessions, including but not limited to, objects, debris, water bottles, water containers, food, food items, food containers, blankets, clothing, footwear, medical supplies, garbage, or trash generated by and/or used by me and/or my group.

This new “clause 13” forms the basis under which our volunteers are currently being prosecuted for their humanitarian aid work. It moves US government land management agencies away from productive collaboration with humanitarian aid groups and toward a racist national administration that puts pressure on all government agencies to uphold a white supremacist agenda.  Migrants are dying on our nation’s public lands and public land managers response is to actively deny access to humanitarian aid and search and recovery groups.  This is unacceptable and morally abhorrent.  We demand that Organ Pipe, Cabeza Prieta, the Goldwater Range, and the Bureau of Land Management admit humanitarian aid and search and recovery groups onto public lands and that all current charges against No More Deaths Volunteers be dropped.